In recent years, New York has become one of the hottest markets in the U.S. for solar. Whether because of the generous New York solar tax credit available to homeowners, the ambitious clean energy policies of the state legislature, or simply because New Yorkers see the climate and economic benefits of installing solar, the Empire State is setting a great example for the rest of the country. If you are interested in a system for your home, our solar calculator quiz can get you a quick estimate of how much you could save by switching to solar. 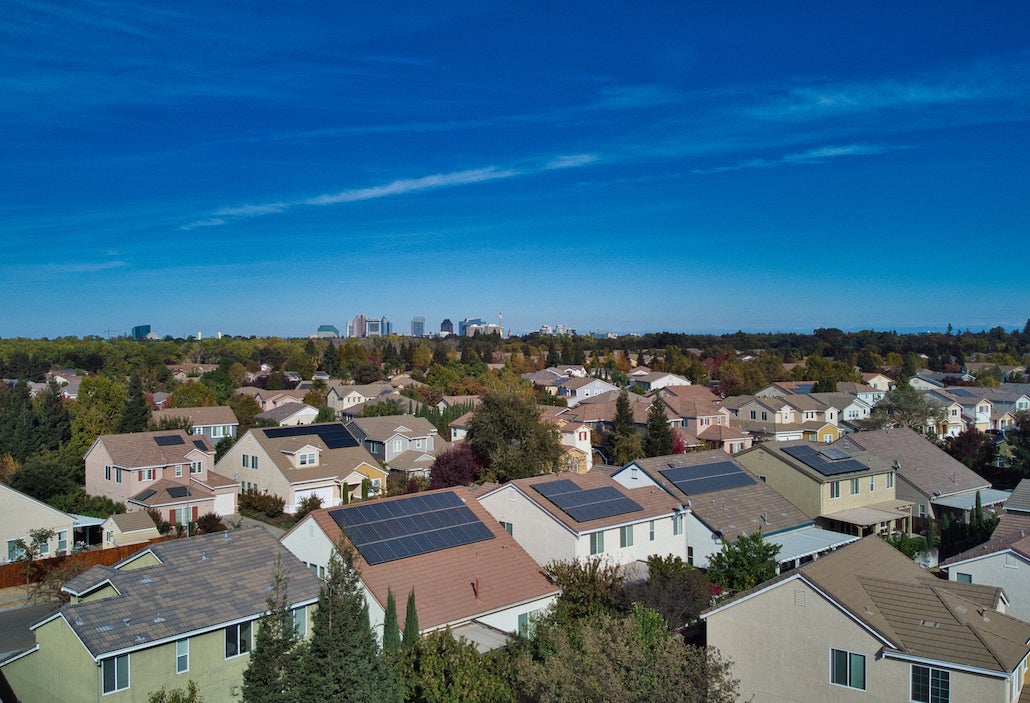 Projected lifetime savings over time, based on purchase type 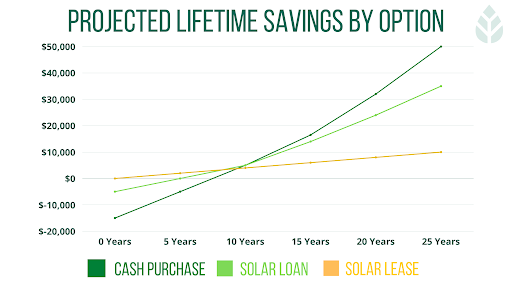 If you have the funds, paying in cash will maximize your long-term savings. For those without the necessary cash flow, a solar loan will make the most sense. Leases, for the most part, are still guaranteed to save you money, but they come with fewer benefits and less flexibility. To get a quick estimate of the lifetime savings you could experience with solar, use our solar calculator quiz.

How much do solar panels cost in New York?

Pros and cons of installing solar panels in New York

Solar panels still perform just as well in the cold, but New York state does not have as much direct sunshine throughout the year as other, southern states.
Proactive policy, strong incentives and high energy rates provide significant economic upside to New York homeowners looking to make the switch to solar. To get a quick estimate of what you can save by making the switch to solar, use our solar calculator quiz!

Solar panel efficiency varies depending on your latitude — the further south you are in the U.S., the more you’ll get out of a small system. The best way to determine whether your home is a good fit for solar electricity is to contact a solar installer in your area. A solar energy specialist can come to take a look at your home and give you a custom recommendation.

Solar panel efficiency can convert over 20% of the sunlight’s energy into electricity, especially if your roof is obstructed by little shade and faces south or west.

A beneficial incentive for New York solar purchases is the New York Solar Rebate, known as the NY-Sun Megawatt (MW) Block Incentive. Unlike the solar tax credit, this program applies not just to residential solar systems but also to nonresidential, industrial and commercial solar installations.

Specifically, the NY-Sun initiative offers up-front discounts for installed solar systems on a “dollars-per-watt” ($/W) basis in the form of a direct cash rebate. The exact amount that a new installation can expect to receive is dictated by the region of New York it’s in, how many of the allotted rebates in that region have already been paid out, the size of the system, and the timeframe in which installation is completed.

Generally speaking, though, the New York solar rebate starts as low as 15 cents per watt and can rise all the way up to $1 per watt, making up over half of the cost of installing solar in the best-case scenario.

In addition to the statewide incentives available for potential solar systems across New York, many towns, cities, and counties will also offer incentives such as tax credits, rebates or otherwise that can be layered on top of the state incentives, serving to move the needle to affordability even further.

One of the most widespread local incentives is a solar property tax exemption. Each municipality in New York can decide whether it wants to take part in the property tax incentive program, and many have opted in. This means homeowners in most areas of the state don’t have to pay increased property taxes after solar panels increase the value of their homes.

Perhaps the biggest solar incentive in the state of New York is the Solar Energy System Equipment Credit.

As explained by the New York State Department of Taxation and Finance, this tax credit is available to anyone who engages in a new solar project for their place of residence, whether that’s through purchasing solar energy system equipment, signing a solar lease, or even committing to a power purchase agreement of solar energy generated by equipment owned by another entity (if that agreement spans 10 years or more).

For any of the above New York solar energy engagements, the person making the purchase or signing the lease or PPA is entitled to a state tax credit of up to 25% of total expenditures (up to a cap of $5,000).

It’s important to note that the New York solar tax credit is not refundable, meaning it reduces your tax liability but is not paid directly if that credit exceeds your expected tax payments. However, any excess credit can be carried over to future tax filings for up to five years.

Regardless of which state you live in, all homeowners in the U.S. are eligible for the federal solar investment tax credit (ITC) for installing solar panels and energy storage devices. The ITC is a tax credit you can claim on your federal return that’s currently valued at 26% of the total cost of your system.

Though the solar tax credit currently sits at 26%, it is set to phase out over the next few years. The credit was first developed through the Energy Policy Act of 2005, under the Bush administration. Initially, it was set to last for just two years, but due to its bipartisan success has been extended for solar installations through at least 2023. (Note that the specific terms of the solar tax credit have changed over the years and may continue to shift.)

To be currently eligible for the federal tax credit, homeowners must meet the following criteria:
You have installed a residential solar panel system at any point from 2006 through the end of 2022.
You have placed the solar panel system in a residential location. It does not have to be your primary residence.
You own the solar system (as opposed to leasing solar panels), meaning you paid for it in cash or took out a solar loan.

You can find general trends for solar tax credit in the chart below, but get connected with one of the best solar companies in your area and get a free, no-obligation quote to get an accurate understanding of your credit opportunity.

10% (for commercial installations only)

10% (for commercial installations only)

Cost of Solar Panels in 2022: What to Expect

Federal Solar Tax Credit: How Much Will You Get Back? (2022)

What Is Solar Energy & How Does it Work?

The information on our website is general in nature and is not intended as a substitute for competent legal, financial or electrical engineering advice. As forecasting solar savings involves assumptions about future electricity prices you should be aware such estimates are inherently uncertain.